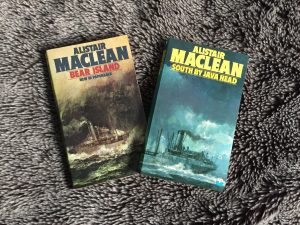 An old school friend reminded me that a love of books is often forged very early in life. He mentioned Miss Brade from Kingsley Junior School who sat on her desk at the front of the class and read some enthralling books. This jogged my memory about another, Miss Richardson, from the Infant School four years earlier. Both of these inspirational teachers gave a performance rather than just a reading, like listening to a radio play.

One such book, The Secret of Spiggy Holes by Enid Blyton, had kidnappers, a boy captive in a castle and secret passages. Another of her books, The Secret Mountain, described the novelty of foreign air travel, an elegant blue and silver aircraft (or so my memory tells me), and hidden doors into an African mountain where a secret tribe worships the sun. How could anyone between the ages of five and eleven resist these tales and not want to discover more for themselves?

In that pre-internet age, it was natural for me to make the local library my second home. Scouring the fiction shelves led me to factual books to look up ‘interesting stuff’: Native American Indian headdresses; secret weapons of World War Two; fossils, rocks and gemstones; the zodiac, alchemy and magic; explorers of the world; and so on. That wonderful little library is long gone and I feel a sense of loss that I cannot even find a photograph of it.

Dad was a huge fan of westerns and had everything written by the prolific J.T. Edson but he started me on the Pocomoto series by Rex Dixon. Realising I was more of an action/adventure person, he began buying me Biggles books by Capt W.E. Johns and every birthday and Christmas would bring another adventure. Relatives bought me crime and mystery books such as Lone Pine London by Malcolm Saville, memorable for its intrigue and descriptions of foggy London streets.

Daytime TV in the early 1970’s (only three channels and no video recorder) was rubbish for a young teenager. So, whenever the long school summer holidays deteriorated into rain-filled boredom, books often relieved the tedium. I found novels lying around the house and became acquainted with Agatha Christie through reading And Then There Were None and The Blue Train. Dad gave me his own copy of HMS Ulysses in which Alistair Maclean drew on his wartime experiences on the deadly convoys to Russia. The Guns of Navarone, South by Java Head and Bear Island followed, making me a lifelong fan.

Since those early days of discovery, reading for entertainment has remained a pleasure. As I continue to discover the back catalogues and new works of authors past and present, the journey continues…